Friends, hello! I feel like I’m sending out this post into the world from some strange, faraway place–your blogging foreign correspondent–and I don’t know why I should even mention that, because every internet thing is more or less ‘unstuck’–not really moored to anything but this blog and hey, you may only ever encounter just this post, so in a way it IS a bit like an island of thought, me standing alone, waving my arms around in an attempt to communicate something—

I’m not on my own computer, is the thing. It’s in the shop. Which means that not only am I attempting to acclimate to the feel of the keyboard and pressure needed to depress the keys, but also that I am completely without all of my photos from the past year–which is what this Think Kit, Day 1 prompt is about (here comes my year-in-photo):

So I feel like I’m starting Think Kit behind, off-kilter. Tipped on my side and asked to write anyway. I’ve already read great posts by friends and last-year bloggers and I’m eager to get my post finished and out there so I can say for certain, Yes. I am Blogging This Year.

Yes I Am. I worked on asserting myself in a new way this year–I resolved, informally, to assert myself more in my own writing. Meaning: I’d start regularly submitting my writing to literary magazines. I had hoped for at least one yes before the year ended–granted, it’s not completely over, but we are running out of time, peeps–but instead I’ve gotten a lot of this: 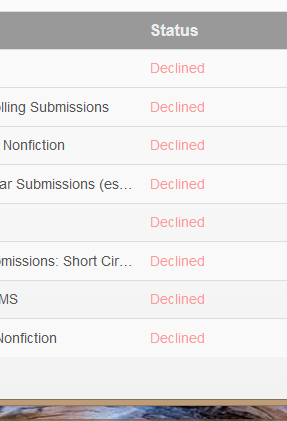 Rejection sucks. I’ll be the first to say that. I’m someone who actively AVOIDS being in situations where rejection of sorts is even POSSIBLE (how did I date??), but that’s the rub: If I want to publish, I gotta settle in and expect the nos.

There is a special kind of solidarity and joy that comes when writers talk to other writers about their failures. I recently went to the Pressgang book launch party for Einstein’s Beach House by extremely prolific writer Jacob Appel, and, after the reading, during Q&A, someone asked him about rejections, and the most times he’s had one piece rejected. The answer? 75. 75!!! We were all reeling.

But wait, there’s more! The 76th time Jacob submitted the piece was to a fiction contest being run by the Boston Review. And he won it.

But wait, there’s EVEN MORE: the Boston Review had previously rejected the piece.

Never have I seen a group of strangers bond as we at Butler University did that night, falling into the crater depths of 75 rejections together, rising in united joy as the dogged writer finally got his due. His story was our story, even if it wasn’t our story yet.

Maintain a blind certainty that you are on the right path, despite all signs to the contrary?

I don’t know. All of this. I think for me, the process of writing and having places say, NOPE, has made me pause and say, do I believe in this thing that I am sending out? Does it satisfy whatever criteria I have for myself and what I write? Yes? Okay. Then keep submitting. And see this instead as a process of calibrating fit.

Or just wearing them down. #76submissions